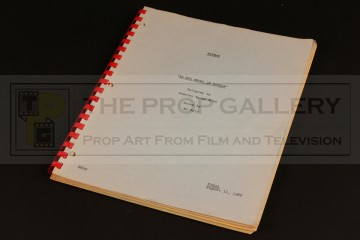 From the Season Two episode An Egg Grows in Gotham broadcast in October 1966 this original production used final script is dated August 11, 1966 and comprises of 67 multi-coloured pages, this script had the outer covers removed and is now spiral bound as used during filming. The base colour of the script is blue but this is heavily revised to include light yellow, dark, yellow, pink, cream and green pages which are dated between August 17, 1966 and August 30, 1966, additionally the script features cast and set lists to the front with a further page detailing the pronunciation of the word 'EGG'.

A rare example of original production material from this classic television series.