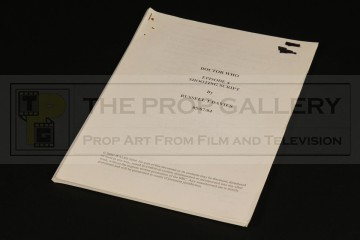 From the 2005 episode Aliens of London starring Christopher Eccleston as The Doctor this original production used shooting script is dated 05/07/04 and comprises of 46 staple bound pages in addition to the front cover which features the title of the series with writing credit to Russell T Davies.

The script remains in excellent production used condition with some rusting to the staple and marker to the top corner, otherwise very fine.