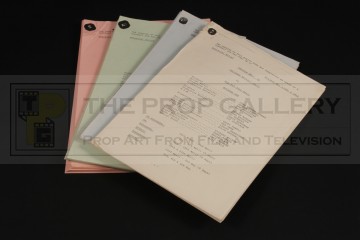 A set of original scripts used in the production of the long running BBC television series Doctor Who.

From the 1987 serial Time and the Rani starring Sylvester McCoy as The Doctor this complete set of rehearsal scripts cover the serial in its entirety with one for each episode, these printed on white, blue, green and pink pages. Each script comprises of over sixty pin bound pages with the covers featuring the working title of the serial 'STRANGE MATTER', recording dates and a list of the various production staff.

A rare example of a complete set of scripts from the production of this long running science fiction series.