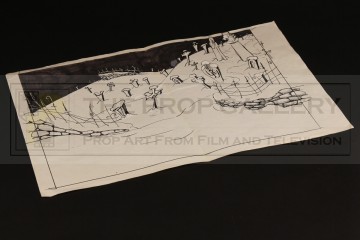 An original concept design used in the production of The Nightmare Before Christmas, the 1993 stop motion animation favourite directed by Henry Selick and produced by Tim Burton.

This is an original production used concept design taken from the original rendering which shows the Halloween Town graveyard, the concept features a number of hand made alterations using liquid paper, pen and marker.