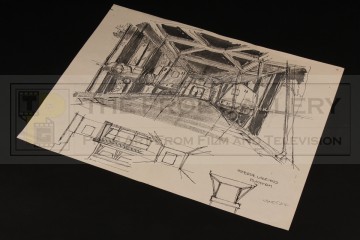 An original concept design used in the production of the 1983 science fiction picture Return of the Jedi, the third instalment of the original Star Wars trilogy directed by Richard Marquand.

This is an original production used copy of the original concept artwork created by production designer Norman Reynolds. The concept features a rough design for the landing platform on Endor with the AT-AT in the background which was achieved as a scenic painting and filmed on Stage 3 at Elstree Studios in March 1982 after redressing the Ewok village set.

The concept measures approximately 14" x 11" and remains in excellent production used condition, folded once to the centre, overall fine.

A fine example of original production material from one of the most influential and highly regarded franchises in cinematic history.