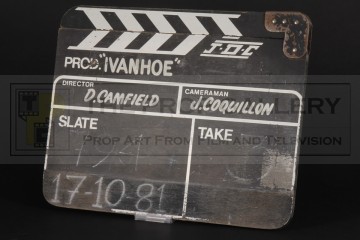 An original clapperboard used in the production of Ivanhoe, the 1982 historical epic directed by Douglas Camfield.

This original production used traditional style black wooden clapperboard with hinged clap stick features the title of the movie 'IVANHOE' in addition to the names of director Douglas Camfield and cinematographer John Coquillon. The main unit clapperboard has spaces where the slate number, take number and date could be marked for reference and exhibits some signs of chalk residue from use during filming.

The clapperboard measures approximately 15" x 11.5" and remains in very good condition exhibiting edge and surface wear consistent with use during the production.

A rare example of original production material from this well received adaptation.