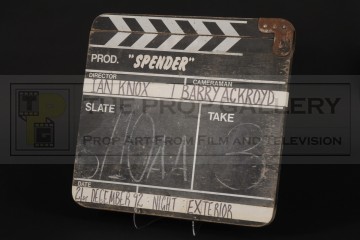 An original clapperboard used in the production of Spender, the British television drama series created by and starring Jimmy Nail.

This production used traditional style black wooden clapperboard with hinged clap stick bears the series title 'SPENDER' in addition to the names of director Ian Knox and director of photographer Barry Ackroyd as cameraman. The main unit clapperboard has spaces where the slate number, take number and date could be marked for reference and exhibits some heavy signs of chalk residue from use during the filming. The board features tape to the bottom which is hand inscribed with the date '21st DECEMBER 92 from its final use during the production, this date, the director and cameraman consistent with this being the final episode of the third season.

The clapperboard measures approximately 15" x 14" and remains in good condition with edge and surface wear consistent with heavy use during the production.

A rare example of original production material from this popular series.