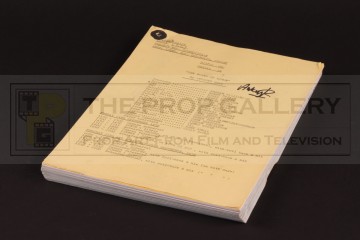 From the 1979 serial The Horns of Nimon starring Tom Baker as The Doctor this is an original camera script for the three day studio recording which took place at BBC Television Centre on 24th, 25th & 26th September, 1979. The script comprises of 142 pages of various colours including white, blue and yellow in addition to a plot outline and cast list. The cover page features the title of the serial with details of the various production staff and a recording schedule, it has been hand signed by writer Anthony Read in black marker pen.

The script remains in excellent production used condition with some light edge wear and minor damage to the leading edge of the rear 20 pages, overall very fine.