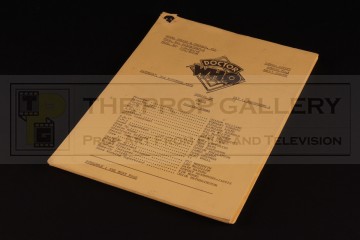 From the uncompleted and unaired serial Shada starring Tom Baker as The Doctor which was intended to be broadcast in 1980 this is an original camera script for the studio recording which took place at BBC Television Centre Studio 3 on Saturday 3rd November, 1979. The script comprises of 83 yellow pages in addition to a schedule, cast list, walk on list and a detailed 4 page running order. The cover page features the series diamond logo with the serial title 'SHADA' below and details of the various production staff.