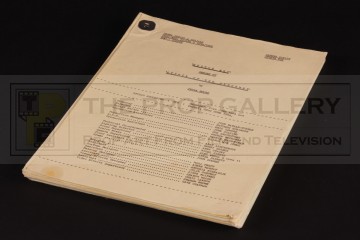 From the 1985 serial Attack of the Cybermen starring Colin Baker as The Doctor this is an original camera script for the two day studio recording which took place at BBC Television Centre on the 21st & 22nd June 1984. The script comprises of 89 yellow and green pages in addition to a recording schedule and cast list followed by a detailed 8 page running order. The cover page features the title of the serial 'ATTACK OF THE CYBERMEN', recording dates and a list of the various production staff below, bound by original pin to the top left corner.