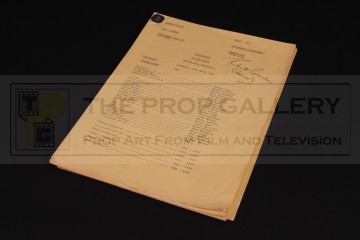 An original script used in the production of Rentaghost, the long running children's television show produced the the BBC.

For the third episode of season seven broadcast in October 1982 this is an original camera script for recording at BBC Television Centre which took place on Saturday 24th April 1982. The script comprises of 49 yellow pages in addition to a cast list and a front cover featuring various details about the production and a list of crew members, this also hand signed by a supporting artist.

The script remains in excellent production used condition with some minor edge wear from use and handling.