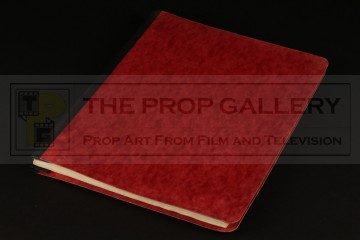 An original script used in the production of Platoon, the 1986 war picture directed by Oliver Stone.

This original production used screenplay comprises of 103 pages bound between front and rear covers of red card. The interior cover page dated June 5, 1984, some two and a half years before the eventual release of the picture, it features the original title 'THE PLATOON' with writing credit to Oliver Stone and production credit to Dino De Laurentiis who was originally planning to produce the picture following an agreement with Stone who co-wrote the screenplay for Year of the Dragon (1985), ultimately De Laurentiis did not produce the picture and instead Stone was given his chance by John Daley of the Hemdale Film Corporation.

The script remains in excellent vintage condition exhibiting some cover wear and rusting to the binding strip, otherwise fine.

A fine example of original production material from this highly regarded picture which was the recipient of four Academy Awards.