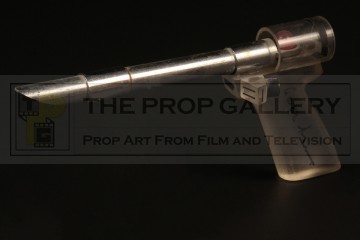 Pistol - Voice from the Past

This prop pistol can be seen used by Nagu (Martin Read) as Blake (Gareth Thomas) arrives on PK118 in the series two episode Voice from the Past. The pistol was built by the BBC Visual Effects Department and is constructed from various materials to include a grip of hand carved acrylic and a barrel of chrome effect plastic tubing and features a faux button and interior detailing to give the appearance of a functional weapon. The grip of the pistol has been hand signed by Gareth Thomas who portrayed Blake in the series, this inscribed in black marker pen.

A highly displayable artefact from this cult science fiction series.