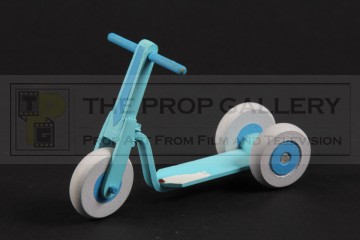 An original prop used in the production of Pingu, the classic stop-motion children's television series which began in 1990.

From the original run of the programme Pingu's scooter made the first of several appearance in the series two episode Pingu Gets a Bicycle which aired in 1994. The miniature is expertly custom fabricated entirely from wood and features moving wheels and steering with a turquoise and blue paint finish.

The scooter measures approximately 4.5" long and 2.75" to the top of the handlebars, it remains in excellent production used condition with some minor paint wear, generally fine.

A very rare and highly displayable artefact from this original run of this classic children's television show.