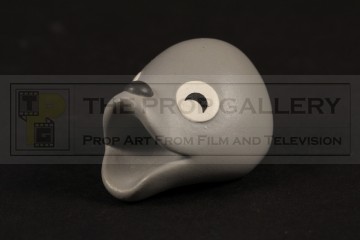 This is an original head appliance for the character of Robby the seal, Pingu's best friend. The miniature is constructed from resin with a hand painted finish and is one of a number of heads with differing expressions created by the production which were detachable from the body allowing them to be switched for replacement animation. A hole to the underside allows the positioning of the head on the body and this retains a quantity of aged adhesive.

A rare principal character miniature from this classic children's series.