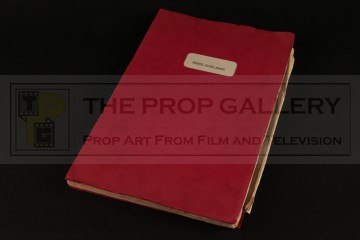 An original script used in the production of Dr. Phibes Rises Again, the 1972 comedy horror sequel starring Vincent Price under the direction of Robert Fuest.

This original production used script comprises of  approximately 100 pages bound between front and rear covers of textured cerise card with a window cut out to the front revealing the title of the movie 'PHIBES RISES AGAIN' to the interior cover page. The script contains a very large quantity of pink, blue and yellow revision pages throughout which are dated between December 1971 and January 1972, one featuring the name of third assistant director Gary White who utilised this script during the production, many pages are crossed in pen and corner clipped to indicate that the shots have been completed, other minor hand inscribed annotations are also present. Added to the rear of the script is an original six page unit list which is dated 1/12/1971 and a three page cast list dated 30/11/71 each featuring minor hand inscriber alterations.

An extremely rare example of original production material from this classic picture.