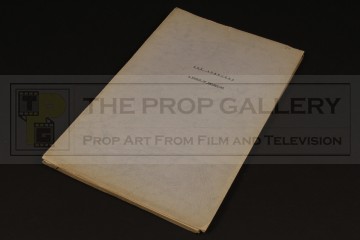 An original script used in the production of The Avengers, the cult 1960s television series starring Patrick Macnee and Diana Rigg.

From the fourth series episode A Touch of Brimstone this was the personal script of Peter Wyngarde who portrayed The Honourable John Cleverly Cartney in this classic and highly regarded story which became widely known for Diana Rigg's Queen of Sin costume. The script comprises of 56 pages in addition to a title page which is dated October 1964 with writing credit to Brian Clemens and the tag line 'IN WHICH STEED JOINS THE HELLFIRE CLUB AND MARTHA BECOMES A QUEEN OF SIN'. The script is bound between front and rear covers of high quality textured blue card with the front type written 'THE AVENGERS - A TOUCH OF BRIMSTONE'. This is an incredibly rare example of a script which clearly saw heavy use during the production, it is heavily annotated in Peter Wyngarde's hand with every line of dialogue and every scene in which he appears underlined and featuring various notes throughout which are hand inscribed in felt pen.

The script measures approximately 13" x 8" and remains in generally excellent vintage condition with some edge wear and toning most noticeably to the covers, overall very fine.

This represents an exquisite example of original production material from this classic television series.