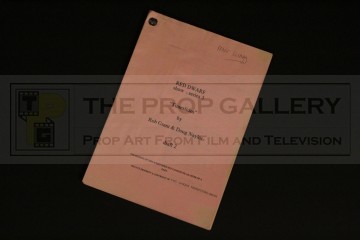 From Timeslides, the memorable episode in which Lister decides to go back in time and change the course of history to become the inventor of the tension sheet rather than his classmate Thickie Holden, this pink coloured script consists of 61 pages with the front cover of the script reading 'show 2, series 3', this was later changed as this story was ultimately broadcast as episode five. This was the personal script of noted BBC Visual Effects designer Peter Wragg who was responsible for much of the model effects work on this much loved BBC television series, his name is inscribed in pen to the top right corner.

The script remains in overall excellent condition with some minor discolouration to the front and back covers due to age and storage.

A fine and rare example of an early script from this cult BBC science fiction series.