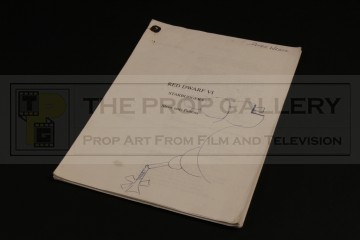 This is an original script used in the production of the Series VI episode Psirens and was the personal copy of BBC Visual Effects Department designer Peter Wragg. The script comprises of 46 pages on white paper in addition to the front cover which is titled 'RED DWARF VI, STARBUGGERS' with the name of the episode below. The front cover is hand inscribed 'PETER WRAGG' to the top right corner and features a large drawing of Starbug in blue pen, presumed in Wragg's hand. Throughout the script there are various instances of hand inscribed annotations which relate to any model shots and prop requirements which would have been the responsibility of the BBC Visual Effects Department.