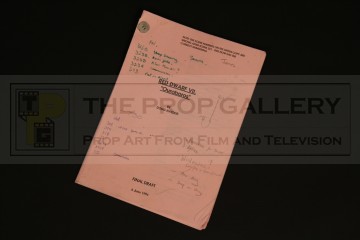 An original script used in the production of the series 7 episode Ouroboros written by Doug Naylor.

This is an original final draft script dated 6 June 1996 comprising of 60 typewritten pages. This was the personal script of renowned BBC Visual Effects designer Peter Wragg who was responsible for much of the model effects work on the series. The front cover is full of notes in felt pen, biro and pencil relating to visual effects shots and a number of pages also carry Peter's pencil notes for particular shots.