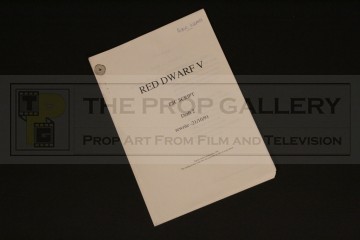 An original script used in the production of the BBC science fiction comedy series Red Dwarf.

This OB (Outside Broadcast) script is dated 21/10/91 and covers the shoot at Kempton Power Station for filming on the Series V episodes Back to Reality, The Inquisitor and High and Low (broadcast as Demons and Angels). The script covers scenes such as those aboard the SS Esperanto in Back to Reality and scenes in the engine room for The Inquisitor. The script consists of 34 pages in addition to the cover which is inscribed to visual effects designer Peter Wragg in pen, it is separated in to three sections each headed with the episode title and the Inquisitor sequence being noted as replacing scene 16.