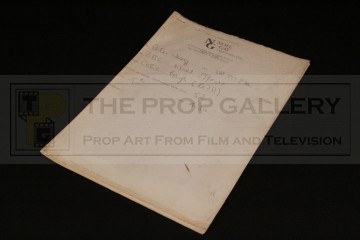 An original script used in the production of the BBC science fiction comedy series Red Dwarf.

This is an original facsimile copy script for the Series IV episode Meltdown which was faxed from Noel Gay Television productions to designer Peter Wragg of the BBC Visual Effects Department. The script consists of 51 pages printed on facsimile paper including a cover page which bears the date '22 OCTOBER 1990' with the name of the series, episode and a return address, although stated as episode 3 to the cover Meltdown was actually broadcast as the last episode of the series due to the Gulf War conflict.

The script also has a covering page from when it was faxed to the BBC which features the Noel Gay logo to the top and fax details stating the recipient as Peter Wragg and the sender as Celia Bargh who was a member of the production team, it also carries the date the fax was sent, 25/10/90. Being a facsimile script every page carries a header with the date, fax number, name of the production company and page number, this was faxed to Wragg just three days after the date on the script as he was likely in need of an advance copy in order to begin work on the visual effects requirements. One part of the script relating to the matter paddle has been highlighted by Wragg in orange and is no longer legible due to the type of paper on which the script is printed.

The script remains in excellent production used condition with some light edge wear and toning, most notably to the covering page, overall fine.

An rare and interesting production artefact utilised by a noted visual effects designer on this classic science fiction series.