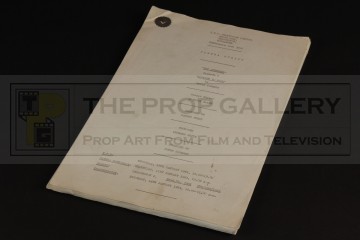 An original script used in the production of The Avengers, the cult 1960s British television series.

This is an original production used camera script issued to director Peter Hammond for the 1961 missing episode Brought to Book. The script comprises of fifty green pages bound by the original pin to the top left and features a cover page headed with the details of A.B.C Television, the title of the episode with production credits and a filming schedule to the bottom. The first interior page contains a list of the various cast members starring in the episode with a more extensive production schedule, four undated pink revision pages are also present.

An exceptionally rare example of original production material from the very early days of this cult television series.