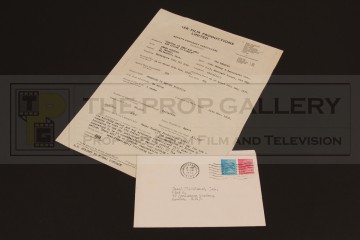 Satanic Rites of Dracula (The)

An original contract from the production of The Satanic Rites of Dracula, the 1974 Hammer Films production starring Christopher Lee and Peter Cushing.

This is a production copy of Peter Cushing's original artist contract for the movie which was issued to assistant director Derek Whitehurst. The contract is headed 'HAMMER FILM PRODUCTIONS LIMITED' and features the original working title of the movie 'DRACULA IS DEAD AND WELL AND LIVING IN LONDON' in addition to Peter Cushing's address and agent details. The contract also details Cushing's salary for the picture which guarantees the sum of £6,000 with a daily rate of £300, the signature to the bottom is that of casting director James Liggat. The top right corner of the document has a list of the production members to which a copy of the contact was intended to be issued to and the position of 'FIRST DIRECTOR' has been inscribed with a tick in blue pen, indicating Derek Whitehurst.

The contract is accompanied by a thank you card from Peter Cushing which was mailed to Derek Whitehurst thanking him for his Christmas wishes. The type written card is on Peter Cushing's embossed personal stationary and is dated January 1973, it is signed in Cushing's hand 'In all sincerity, Peter'. The card is complete with the original envelope in which it was mailed to Whitehurst and features the post mark 'WHITSTABLE, KENT', the location of Cushing's residence as referenced on the contract.

An incredibly rare artefact from this horror picture which would be the final collaboration between Peter Cushing and Christopher Lee in a Hammer Films production.