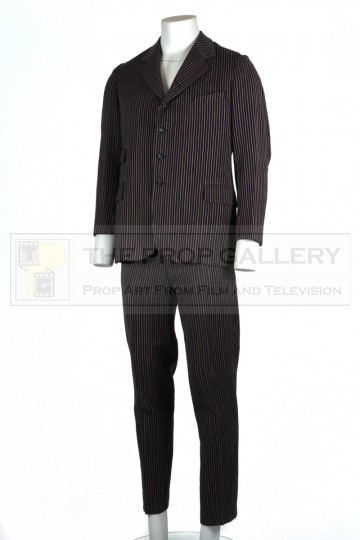 An original costume used in the production of The Godfather Part II, the 1974 epic crime picture starring Al Pacino and Robert De Niro under the direction of Francis Ford Coppola.

This suit was worn by Bruno Kirby as the young Peter Clemenza alongside Robert De Niro in the flashback sequences which chronicle the rise to power of Vito Corleone. This suit was bespoke made for Kirby by leading industry tailors Western Costume, consisting jacket and trousers of distinctive pinstripe both featuring their original Western Costume labels which are type written '2869-1, Bruno Kirby, Jr' with sizing information, further stamped by the costume house '1920, SUIT 3PC' this crossed and replaced '2PC', the matching waistcoat seen worn in the dining sequence having been used for a subsequent production and long since separated from the remainder of the wardrobe.

The costume remains in excellent vintage condition throughout, exhibiting some wear to the interior lining, otherwise fine.

A fine example of principal character wardrobe from this highly regarded classic which is frequently regarded as one of the greatest pictures in the history of cinema.