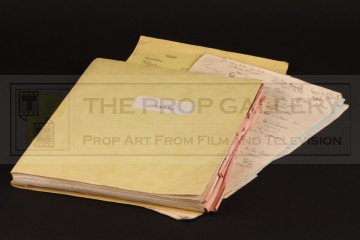 An original script used in the production of Percy, the 1971 British comedy picture directed by Ralph Thomas.

This original production used script comprises of 114 pages bound between front and rear covers of yellow card with the front featuring a window cut out revealing the title of the movie to the interior cover page which is hand inscribed with the name of assistant director Derek Whitehurst who utilised this script during the production. The script features extensive annotations throughout which are inscribed in Whitehurst's hand in addition to a large quantity of pink revision sections which are simply inserted in the relevant place with the original script pages left intact rather than being removed which is usually the case. The script is accompanied by a wealth of production material to include cast list, call sheets, partial shooting schedule, several pages on hand inscribed notes and a brown envelope containing 17 cast sheets and an information page on production headed stationary featuring a type written note to Derek Whitehust.

The script remains in excellent production used condition with some light wear from use and handling, heavier wear to inserted revisions with the accompanying paperwork in varying conditions, generally good to excellent exhibiting wear.

An exceptionally rare and concise collection of original production material from the production.