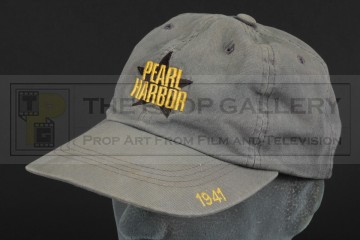 An original script used in the production of Pearl Harbour, the 2001 war drama directed by Michael Bay.

Caps such as this were issued to crew members during the production, the one size fits cap features the movie logo embroidered to the front with producer credit and an USA flag to the rear. It remains in good used condition.