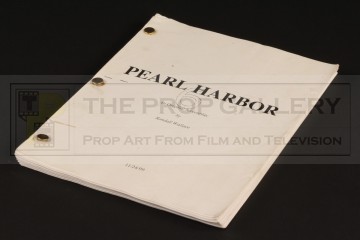 An original script used in the production of Pearl Harbour, the 2001 war drama directed by Michael Bay.

This original production used script is dated 11/24/99 and comprises of 111 pages with a front cover featuring the title of the movie and a further introduction page stating that the picture is based on factual events. The script features the number six watermarked to each page and is hand inscribed to the verso of the rear page ' S/C 45-46 B STAGE' which relates to the shooting of a particular sequence, it remains in good production used condition with some edge and cover wear and minor rust transfer from the binding pins.