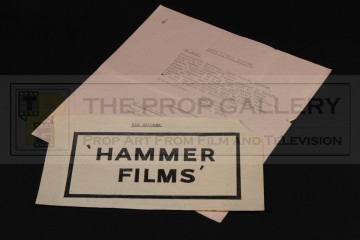 This is a vintage original parking pass used by Hammer Film Productions, printed on non adhesive paper despite being headed 'CAR STICKER' the pass features the Hammer Films logo in bold print. This is accompanied by a sheet of directions for Bray Studios where much of Hammer's output was filmed, this is similar to a call sheet and is printed on pink paper which is headed 'ROUTE TO BRAY STUDIOS' and details directions via road, studio coach and train. From the collection of assistant director Derek Whitehurst who was a veteran of Hammer Film Productions dating back to The Curse of Frankenstein (1957).

An extremely rare example of original material relating to this noted production company.