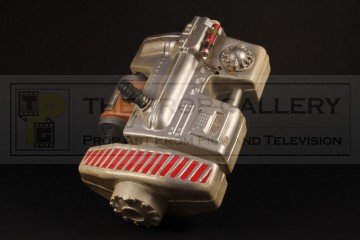 This pack can be seen worn on the spacesuits seen in various scenes of the movie serving as the life support system. The spacesuits were visioned by noted costume designer John Mollo of Star Wars and Alien fame with this pack being one of a number custom made for the production by Andrew Ainsworth who also created the spacesuit helmets.

The pack is constructed from thick vacuum formed plastic the pack is detailed with various found parts such as a respirator housing and hoses, it features various decals including one bearing the Con-Am logo. Finished in cream paint with red highlights to the bottom the pack has been over sprayed in silver likely for used in a subsequent production as parts of the Outland spacesuits are known to have been reused in various other movies throughout the 1980's. This does not detract from the piece as with the exception of the light silver paint it remains as it was used in Outland.

The spacesuit pack measures a very impressive 25.5" x 17" and remains in good vintage and production used condition with some minor paint wear and yellowing due to age.

A recognisable and highly displayable artefact from this classic science fiction thriller.