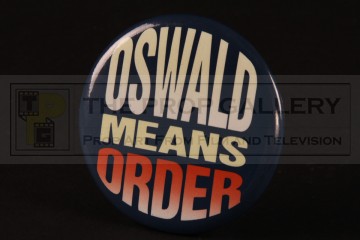 An original badge used in the production of Batman Returns, the 1992 superhero sequel starring Michael Keaton as the caped crusader under the direction of Tim Burton.

Campaign badges such as this can be seen worn by the supporters of Oswald Cobblepot (Danny DeVito) as he runs for the position of Gotham City Mayor. Constructed from metal with a pin to the verso the badge measures 3" in diameter and remains in excellent production used condition.

An affordable and displayable artefact from this classic of the superhero genre.