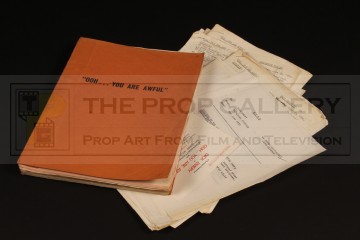 Ooh... You Are Awful

An original script used in the production of Ooh... You Are Awful, the 1972 comedy starring Dick Emery.

This original production used script comprises of 129 pages bound between front and rear covers of orange card with the front featuring the name of the movie in bold print, the interior cover page is hand inscribed with the name of first assistant director Derek Whitehurst who used this script during the production. The script features extensive annotations throughout which are inscribed in Whitehurst's hand and numerous coloured amendment pages. The script is accompanied by a wealth of production paperwork to include 9 call sheets, several maps and production memos, unit and cast lists, Quintain Productions letterhead and press show invitation, numerous parts of this paperwork again featuring hand inscribed annotations.

The script remains in excellent production used condition with some light wear from use and handling with the accompanying paperwork in varying conditions, generally good to excellent with minor creasing and tearing to some pages.

An exceptionally rare and concise collection of original production material from this classic comedy.