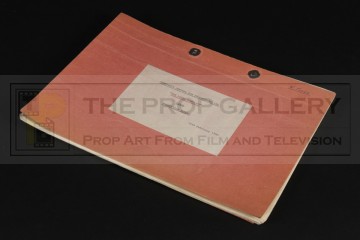 An original document used in the production of Omen III: The Final Conflict, the 1981 supernatural horror directed by Graham Baker.

This is the original final budget for the production comprising of 45 pages bound between front and rear covers of pink card with the front featuring an applied label which is type written 'TWENTIETH-CENTURY-FOX PRODUCTIONS LTD, THE FINAL CONFLICT, FINAL PRODUCTION BUDGET' and dated 25th February 1980, additionally hand inscribed 'W. FINCH' to the top corner for production accountant William Finch. The first page features a summery of production costs authorised by both director Graham Baker and producer Harvey Bernhard, the remainder of the budget is broken down in to various categories with figures for each expense noted, these covering every aspect of the production and totalling £2.6 million converted to $6.1 million, there are various annotations throughout the budget which are hand inscribed in pencil.

The budget measures approximately 11.5" x 8.25" and remains in excellent production used condition exhibiting some minor edge and creasing to the cover from use, generally fine.

A very rare and interesting example of original production material from this classic horror franchise.