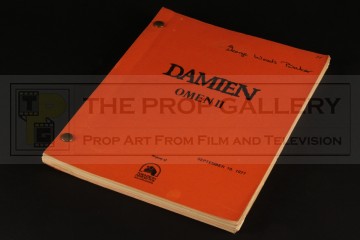 An original script used in the production of Damien: Omen II, the 1978 horror sequel directed by Don Taylor.

This original production used final shooting script is dated September 19, 1977 and comprises of 108 pages bound between front and rear covers of orange card with hte front featuring the movie logo and hand inscribed with the name George Woods Baker to whom the script was issued. The script features a large quantity of pink revision pages throughout which are dated October 02, 1977 and also some minor hand inscribed annotations.

The script remains in excellent production used condition throughout  exhibiting only minor edge and cover wear from use and handling, overall fine.

A fine example of original production material from this classic horror franchise.