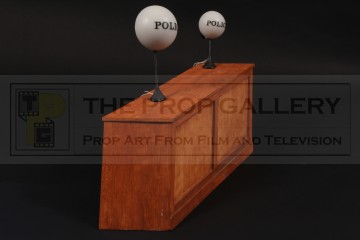 This police desk miniature can be seen used as Jack delivers his presents and his gifts terrify the population, constructed from hand painted wood the desk is built at an angle to force the perspective we seen on camera, it features two lights with the 'POLICE' logo and holes to the top used to secure the small telephones during filming, wires present to the rear with original bulbs in working order, glue residue present to the base.

The miniature measures approximately 24" long and stands 17" to the top of the lights, in fine screen used condition.