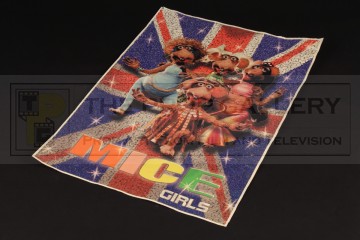 A poster identical to this can be seen in Rizzo the Rat's room and motivates him as he does his morning workout being directly referenced as he looks at it and says "I do it all for you ladies". The poster of the pop group Mice Girls, a spoof of the popular British group Spice Girls, features four mice posing against a Union Jack background with their colourful logo below.

The poster measures approximately 17.5" x 12" and remains in excellent production used condition with some crinkling and minor wear to the verso, there are three sets of pin holes to each corner with one of these appearing identical to the placement of those on screen, overall fine.

A highly displayable artefact from this classic franchise.