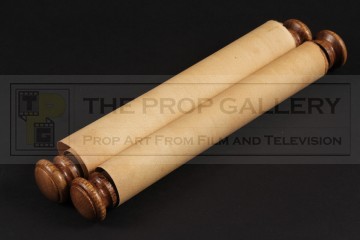 This is the original scroll used by Ben Forster as Mr. Perkins in the segment Mr Perkins' Treasure Hunt where it plays a central role. Constructed from thick parchment like paper which has been weathered to appear aged the scroll features various nonsensical writing with wooden handles to each side.

The scroll measures approximately 13" long and 21" wide when unrolled, it remains in fine screen used condition.

An affordable and unique artefact from this popular children's television series.