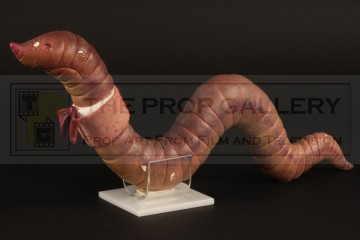 An original stand in puppet used in the production of James and the Giant Peach, the 1996 fantasy picture produced by Tim Burton and directed by Henry Selick who had previously collaborated on The Nightmare Before Christmas.

An original stand in puppet for the character of Mr. Earthworm, this static model is constructed from solid resin with a hand painted finish and features a collar of felt with a resin bow tie. The Earthworm measures approximately 15" long and remains in good condition with some minor paint wear and lacking his glasses, otherwise fine.