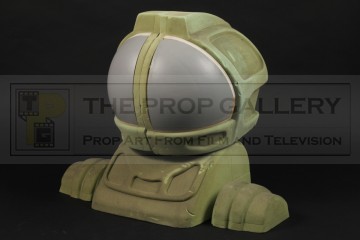 This is the original master pattern of the helmet and chest section sculpted during the production of Sam Bell's (Sam Rockwell) spacesuit at Shepperton Studios. The material elements of the suit were provided by costume but for the helmets director Duncan Jones approached Bill Pearson and it was Bill and his model team which provided the helmet and chest packs used on screen which were vacuum formed in ABS plastic.

This master pattern was sculpted by Chris Hayes who worked from an initial concept by production designer Tony Noble and a 1:6 scale maquette version created by Bill Pearson, sculpted in green high density polyurethane foam with soft curves and recessed details the helmet clearly draws influence from those used in Ridley Scott's Alien (1979). The helmet sculpt is in two halves and features EMA plastic to the visor area which provided a perfectly smooth curve from which to sculpt to, vacuum formed as a complete shell this visor area, light hole to the top and side windows would be carefully removed to create a usable helmet, the foam to the centre side of both halves is essentially waste which would be precisely cut before joining two formed halves together ensuring a quality finish.

Accompanying the helmet are the original master pattern sculpt for the chest section and the suits shoulder epaulettes, the latter ultimately were not seen as part of the costume in the final cut of the film. Both pieces are accomplished in the same high density foam as the helmet providing the master off which to form the screen used components. From these master patterns only two complete spacesuits were produced and used in the movie, the pattern offered here is the only one made for production and is absolutly unique.

The patterns remain in excellent condition with some edge wear from storage and their role in the production process, the two parts of the helmet together measure approximately 15" wide, 14" deep and stand 13" high. The chest section measures 11" x 12" x 7" and the epaulettes 8" x 5" x 3. The final three images show the two original componants produced from these patterns followed by these very pieces behind the scenes at Shepperton Studios during the production of Moon.

These artefacts represent an impressive display spectacle and a very important element of the production process on this already cult science fiction masterpiece.