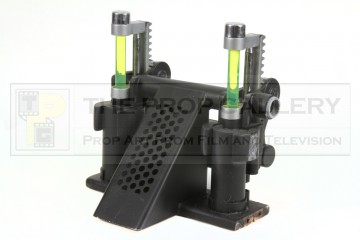 An original control handle used during the production of Moon, the acclaimed 2009 science fiction drama directed by Duncan Jones and starring Sam Rockwell.

This handle formed part of the controls inside the live action interior rover set created at Shepperton Studios which was used for shooting shots of Sam Bell (Sam Rockwell) in the rover cockpit with much of the set dressed by the miniature effects team assembled by Bill Pearson. The industrial looking control handle is constructed from plastic and metal with a wooden base and a gear action which reveals green vials when the handle is used. The prop is finished in black paint and features some wiring to the underside which was cut when it was removed from the set. This bespoke made piece was built by Bill Pearson himself and is one of only two used during the production.

The control handle measures approximately 8" wide, and stands approximately 7", the prop remains in excellent screen used condition throughout. The final image shows the handle on the interior rover set behind the scenes at Shepperton Studios.

A displayable artefact from this already cult science fiction masterpiece.