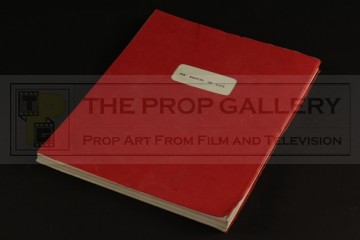 Monty Python's The Meaning of Life

An original script used in the production of Monty Python's The Meaning of Life, the 1983 musical comedy directed by Terry Jones.

This original production used script dated March 1982 comprises of 115 pages bound between front and rear covers of red card with a window cut out to the front revealing the title of the movie to the interior cover page. The script contains various coloured revision pages throughout which are dated July 1982 and contains 11 storyboard pages each featuring eight illustrations for The Crimson Permanent Assurance short which was originally intended as an animated sequence within the feature, titled heres as "The Crimson Pearl Assurance, A Tale of Piracy on the High Seas of Finance".

A fine example of original production material from this classic comedy.