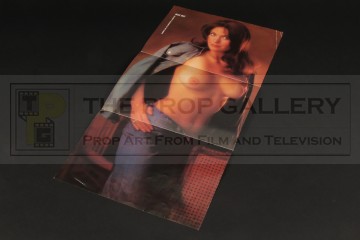 This prop Playboy centrefold was custom made for the production and features actress Colleen Camp who portrayed Miss May, this image was shot by noted Playboy photographer Mario Casilli and was subsequently published in the magazine following the release of the movie. A centrefold such as this can be seen in various scenes of the movie and even more prominently in Coppola's 2001 Redux cut.

The centrefold is printed in the typical manner with a large image of a topless Camp and the traditional Playboy party jokes and other content to the verso, it measures approximately 23" x 11" and remains in very good original folded condition with some line wear and a further crease to the right corner, otherwise fine.