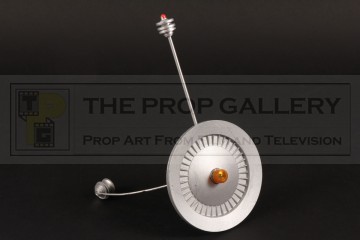 From the 1973 serial Frontier in Space starring Jon Pertwee as The Doctor this is the original mind probe used by General Williams (Michael Hawkins) as he interrogates The Doctor. Custom made for the production by the BBC Visual Effects Department the prop is constructed from plastic and metal parts with kit detailing to the rear and a bulb cover to the centre. Clearly seen worn by Pertwee throughout the scene this significant and unique artefact can be seen featured in Doctor Who: The Vault by Marcus Hearn and this marks the first time it has ever been offered for sale on the collectors market.

The centre section of the probe measures approximately 4" in diameter with the head locators extending to around 6", standing 8.5" to the longest point the piece remains in excellent vintage screen used condition exhibiting only extremely minimal paint wear, overall very fine.

This represents an exceptional artefact from the golden age of this classic series and a fine example of a unique prop worn by The Doctor himself, the rarity of such significant pieces from the Jon Pertwee era of the show cannot be overstated.