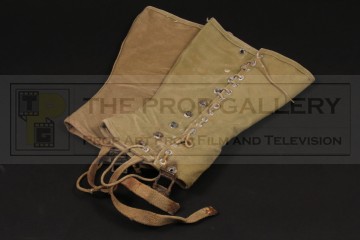 An original costume used in the production of Saving Private Ryan, the 1998 war epic directed by Steven Spielberg.

Gaiters such as these can be seen worn by soldiers throughout the movie, the genuine military issue gaiters are constructed from hard wearing green material with hook fastenings and buckles and are both stamped to the interior  'US ACAD' for Academy Costumes who supplied the wardrobe for the picture.

An affordable example of original wardrobe from this highly regarded modern day classic which was the recipient of five Academy Awards.