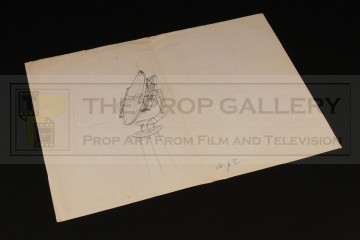 An original concept artwork used in the production of Thunderbirds, the pioneering television series of the 1960's created by Gerry and Sylvia Anderson.

This is an original working concept artwork for the solar reflector dish, the central plot device of the season two episode Lord Parker's Oliday broadcast in 1966. The artwork was hand drawn by Mike Trim, a prolific designer on several Anderson series and assistant to noted special effects director Derek Meddings, accomplished in pencil the artwork details the design of the dish atop the generator and is signed 'M. J. Trim' by the artist in pen to the bottom.

The artwork page measures approximately 20" x 14" with the actual sketch around 10" x 4", it remains in excellent vintage condition exhibiting some minor edge wear and toning with a central fold which does not compromise the artwork itself, overall fine.

A fine example of original concept artwork used in the production of this groundbreaking and highly regarded Anderson series.