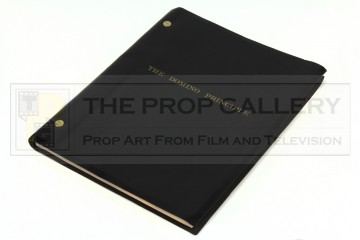 An original script used in the production of The Domino Principle, the 1977 thriller starring Gene Hackman under the direction of Stanley Kramer.

This original production used revised first draft script is dated January 15, 1976 and comprises of 124 pages bound between front and rear covers of black plastic card with the front embossed 'THE DOMINO PRINCIPLE' in gold lettering. The script contains a large number of coloured revision pages throughout which are dated  throughout January 1976, this was the personal script of the late Mickey Rooney who portrayed Spiventa and has been autographed by him to the interior cover page in black marker.