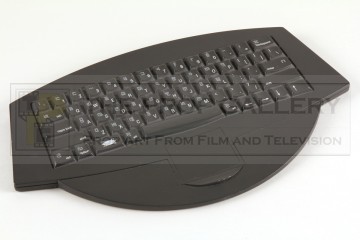 An original prop used in the production of Men in Black II, the 2002 science fiction comedy sequel starring Tommy Lee Jones and Will Smith.

Keyboards such as this can be seen used by various characters at the organisations headquarters, the static prop is constructed from moulded resin finished in grey paint and features applied stickers to create the characters with many bearing the alien equivalent and one the organisations logo.

A displayable artefact from the production of this well received franchise.