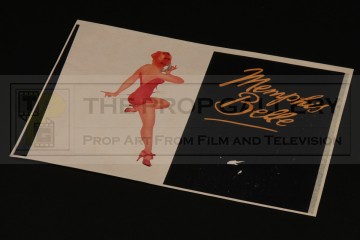 A pair of original decals created for the production of Memphis Belle, the 1990 war picture directed by Michael Caton-Jones.

These decals were custom printed by the production for use as nose art on the Boeing B-17F Flying Fortress bomber known as the Memphis Belle. The two decals, one of the aircraft name and another of a female pin up, are printed on self adhesive Canon paper and were intended for use on the model miniature aircraft used during the production but were ultimately surplus to requirements.

The decals  are presented on an A4 sheet and measure approximately 4.5" x 3.5" and 6.5" x 3" respectively, they remain in excellent production made and unused condition, very fine.

A affordable artefact from the production of the classic war picture which requires no introduction.