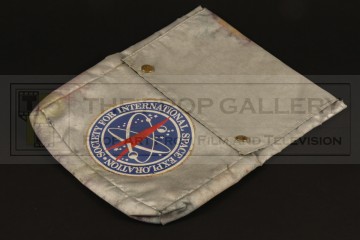 An original costume piece from the production of the 1979 James Bond picture Moonraker starring Roger Moore as the suave spy.

This pouch was custom made by the production for use on the spacesuits worn by the United States Marines. The utility pouch is constructed from silver material and features a Society For International Space Exploration pouch with an emblem to the centre, the pouches ultimately used on screen did not feature this patch however the patches were used on the upper arms of the spacesuits with some of the writing obscured by a red band.

The pouch measures approximately 10" x 8" and remains in acceptable condition with some significant ink staining to the interior which is also visible to the exterior.

An rare artefact from one of the most celebrated franchises in cinematic history.