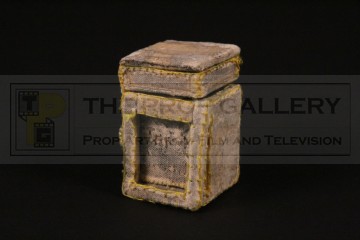 An original prop used in the production of the hit children's television series Tom and Vicky voiced by Richard Attenborough and Rik Mayall and directed by Martin Pullen.

This magic box miniature was used in the episode Hey Presto is constructed from wood dressed with material which has been hand painted and hand stitched to create the signature Tom and Vicky look. The box features a sliding window to the front and an opening top which is hinged with wire, it is accompanied by a plastic bag which is original to the production and is hand inscribed '189 MAGIC BOX'.

The magic box measures approximately 2.25" high and remains in good production used condition with some wear including glue residue.